The Painted Hall in Greenwich 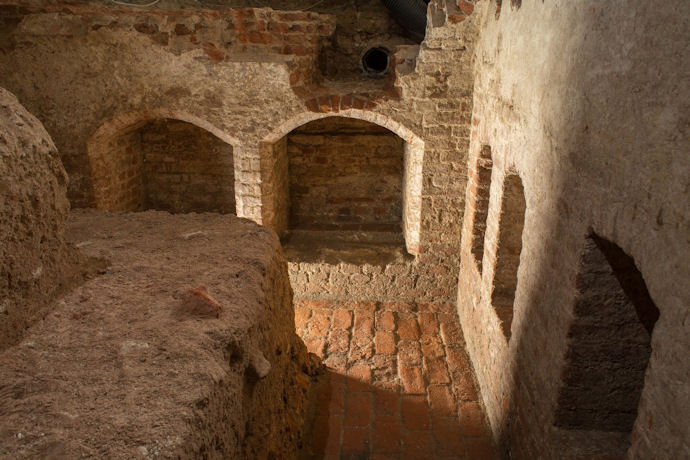 Winter bee boles discovered in tudor cellars underneath the Painted Hall in Greenwich.

Despite several previous archaeological investigations in the vicinity of the Tudor palace, which once stood in the area now covered by the former Royal Naval College and National Maritime Museum, Greenwich, very little physical evidence for it has actually been recovered. Instead a very interesting discovery was made. A Watching Brief by Tanya Jones of Pre-Construct Archaeology Limited was anticipated to continue this trend during an restoration works at the Painted Hall, for the Greenwich Foundation. The site lies within the grounds of the Palace of Placentia, originally constructed in 1443 and subsequently enlarged and altered throughout the Tudor period. It was mostly demolished by Charles II.

The watching brief monitored the lifting of floors and their make-up deposits and initially found 18th and 19th walls and flues, but then a sunken 15m2 room was found towards the north-eastern end of the Painted Hall undercroft. Analysis confirmed that the three extant walls of the sunken room were constructed from small Henrician bricks while the neatly laid floor was constructed of rows of over 100 tiles and 100 paving bricks. The preservation of glazes on the tiles varied considerably but most were plain yellow over a white slip, while a few were glazed black or dark green. Five stone pavers in various sizes were located at the south-western end of the room, possibly close to an entrance and a contemporary stepped feature was also found at the north-western end of the room. The tiles have been dated to the late 15th to early 16th century, but the same paving bricks at Hampton Court are thought to be earlier, dated to the 1520’s to 1540’s. We are currently assuming a construction date of between 1510 and 1550.

The sunken room was visually and historically interesting enough for the Greenwich Foundation, and their architects, Hugh Broughton Architects, to immediately consider how it could be made visible to the visiting public, a challenging feat considering its location was just at the proposed visitor entrance!

However, as the watching brief continued north east of the cellar it revealed first a Tudor wall and then the deeper floors of parts of two vaulted cellars which would originally have had an internal height of about 2m. To date only the interior of one cellar has been revealed, but the external west and south wall of the second has been exposed.  Both of these have niches built into them, four smaller ones in the western wall and three larger ones with chamfered divides and horizontal grooves near the base of the niches in the southern wall, possibly for trays. Although the construction of the cellars is stratigraphically earlier than the glazed and tiled floor they most likely to be contemporary. On seeing photographs of these beautiful niches they were immediately identified by staff member Kari Bower as being “Bee Boles” and within a short time she had found the documentary evidence for Tudor bee boles in cellars used for the storing of skeps (straw/wicker hives) during winter.

Sheltering bees from extremes of weather, including the winter months is probably as old as bee keeping itself and helps the bees to conserve their energy and food stores. Skeps were an early form of hive made of straw or wicker, but the sheltering of skeps in walls (bee boles) is almost unique to Britain and Ireland, while bee boles constructed in brick walls is concentrated in Kent. While the majority of datable examples are from the seventeenth and eighteenth centuries, Kent has several dating to the fifteenth and sixteenth centuries, three of which are in cellars. (See footnote) The earliest printed reference to wintering bees indoors was published by Gerrard Malynes in 1622 and with a bee wintering instruction by Samuel Hartlib in 1655 which might be taken to refer to using a cellar or an outbuilding.

The public access entrance at the Painted Hall in Greenwich is now subject to a redesign to allow both the tiled floor and the cellars with the bee boles to be viewed by the visiting public. Further uncovering of the structures will be required to maximise what can be viewed and interpreted, which will involve further archaeological investigation and recording. As probably a unique opportunity to view Tudor cellars for the winter protection of skeps in bee boles, this promises to be an exciting exhibit.