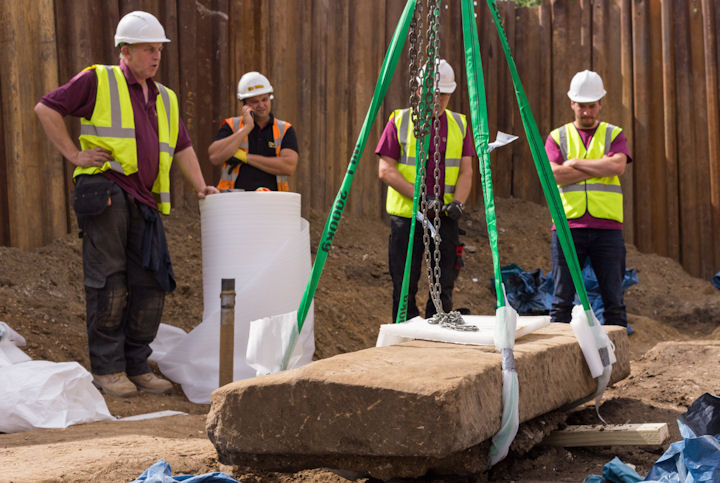 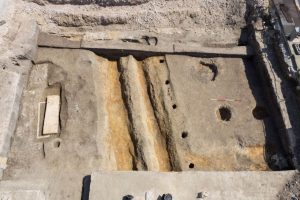 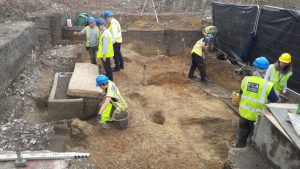 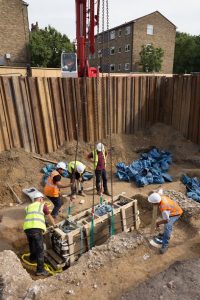 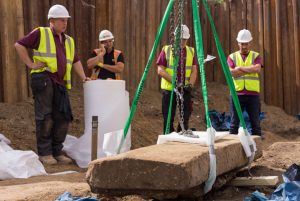 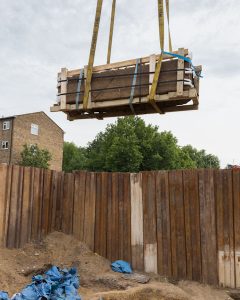 As you might have noticed, there has been a bit of brouhaha regarding the finding of the Roman period sarcophagus in the course of the recent excavations by PCA on a site at the junction of Swan Street and Harper Road in Southwark. However, unless you looked very hard at some of the photographs you would be hard pushed to know PCA had anything to do with it or that there was anything else found other than the sarcophagus. We are now able to provide a bit more detail on the findings at this fascinating site.

The excavation team from PCA, ably led by Ireneo Grosso, were appointed by CgMs, on behalf of Galliard Homes. The excavations were undertaken in phases over several months and were dovetailed more-or-less seamlessly between the demolition and initial construction works.

The site is located within an area referred to as the ‘Southern Cemetery’, although there is no actual evidence that there is a single unified cemetery but probably a number of discrete burial grounds on the periphery of Roman occupation. To date approximately 500 Roman period burials have been recovered from the Southern Cemetery area, but until recently not one of them was a stone sarcophagus. Interesting burials abound including the famous Harper Road “princess” and high status mausolea along Great Dover Street, That has clearly now changed.
Sadly however, the PCA team were not the first to have discovered the sarcophagus since it was first buried, but it was the first to do it in a controlled and rigorous fashion. It appears that during the process of quarrying chalk from a possible ‘mausoleum’ structure adjacent to the sarcophagus in the  18th century, the massive stone lid prised off and, we assume, the contents at least partially robbed. The lid lay cracked and misaligned, as it was left following this rather less painstaking 18th century investigation!

The sarcophagus itself measures approximately 2.4m long, 75cm wide and 65 cm high and (at least) filled with earth. The significant challenge, given that it was directly on the piling line, was to lift the sarcophagus (which already has several significant cracks) out of the excavation area. This has been managed successfully by a specialist team including Clivedon Conservation, and the sarcophagus has been taken to the London Archaeological Archive and Research Centre, where the fill will be excavated under controlled conditions.

The sarcophagus was by no means the only significant finding of the excavation. A previously unrecorded compacted gravel road, at least 7m wide and flanked on the west side at least by large ditches cut across the site on an approximately NNE-SSW orientation. Roads of this size are considered by the doyen of Roman roads, Ivan Margary, to be in the most important class of roads.  It is conceivable, but not proved, that this was part of the elusive London to Chichester road known as Stane Street.

If it was Stane Street it is on a different alignment and a little to the east of that traditionally held. However, our understanding of the road infrastructure of Roman Southwark is improving, with many more roads identified within the areas of occupation and the Harper Road example may be another one of these.

Towards the western limit of excavation were the chalk foundations of a masonry structure against which the sarcophagus abutted. The structure was parallel to the road, and given this location and relationship, has been interpreted as a mausoleum. These were relatively high status funerary monuments and only previously identified in Southwark at Great Dover Street, which itself is roughly on the alignment of the Roman London to Richborough road.
Moving forward our next steps will be excavating the fills of the coffin. Has it been plundered or and its contents relatively intact? Keep an eye out for further updates on the excavation of the remarkable contents of this extraordinary discovery which has already caused a flurry of excitement in the press..